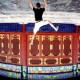 Ask GH: How can I re-confirm/re-activate a stale email list?

I'm helping a fledgling game dev studio prepare for a Kickstarter and I want to re-confirm, clean and activate an email list with 60k emails gathered over the years from their forums before importing to MailChimp to avoid any risks from high bounce rate and potential spam reports.

MailChimp recommends (link below) doing this outside of the platform using Gmail or something similar to manually send the emails, but Gmail can only send 500 mails/day. At that rate it would take me 4 months to mail the whole list!

So I want to ask GH:

Are there any other tools or methods I can use for bulk email besides Gmail?

Would GH make the effort to clean the list or just try going with a clean slate?

Is there anything else I should know about how to clean up and re-confirm an old email list?